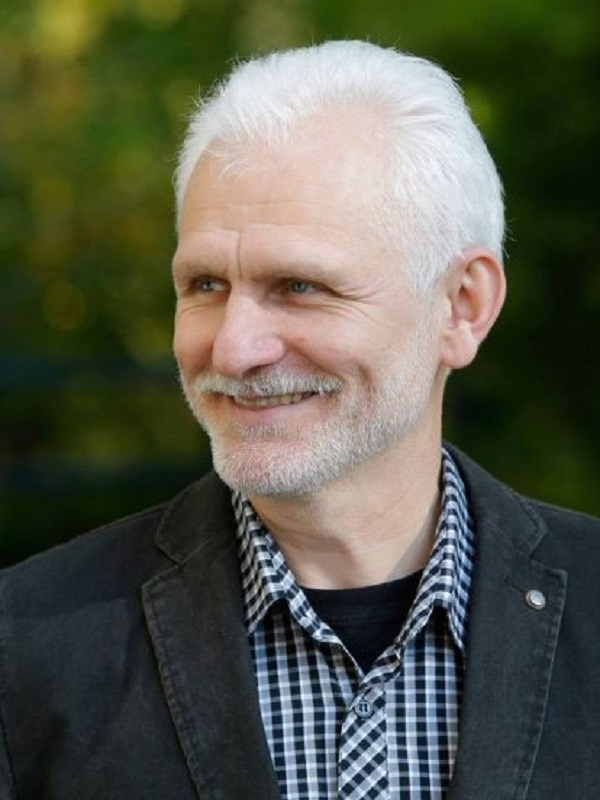 Aleś Bialacki is a Belarusan human rights defender, public figure, head and founder of the Human Rights Defending Center „Viasna“ (“Spring”), the Nobel Peace Prize laureate in 2022, a political prisoner. He was detained in July, 2021, according to criminal charges that can result in 7 years of imprisonment.

Aleś Bialacki is a Belarusian human rights defender, public figure, head and founder of the Human Rights Defending Center „Viasna“ (“Spring”), the Nobel Peace Prize laureate in 2022, a political prisoner. He was detained in July, 2021, according to criminal charges that can result in 7 years of imprisonment.
Aleś Bialacki was born on September, 25th, 1962, in the urban settlement of Vyartsilya in the Republic of Karelia, where his Belarusian parents worked at that time. In 1965, the family returned to Belarus and settled in the town of Śvietḷahorsk.
In 1984, Ales graduated from the History and Philology Department of Homiel State University and worked as a teacher for several years.
In 1986, he initiated the creation of the Young Writers Association „Tuteïšyja“ (“Locals”). In 1987, he signed an appeal to the Minsk City Council in order to carry out the first mass action dedicated to the day of memory of ancestors “Dziady” („Grandfathers“), which is also the day of remembrance of victims of Stalin repressions. In 1988, he participated in the creation of one of the first Belarusian human rights defending organizations – the société „Martyrology of Belarus“.
In 1989, he finished his postgraduate studies in the Institute of Literature at the Academy of Sciences of Belarus. In 1989-1998, he worked as director of the Literary Museum of Maksim Bahdanovič. In 1991-1996, he was elected deputy of the Minsk City Council of Deputies.
In 1996, Aleś founded the human rights defending organization „Viasna“. He was head of the working group of the Assembly of democratic non-governmental organizations of Belarus (2000-2004); vice-chairman of the public association “Belarusian Popular Front „Revival“”; vice-president of the International Federation for Human Rights (FIDH) in 2007-2016. For his active public and human rights defending activity, he was brought to trial more than 20 times.
In 2011, he was detained, accused of „tax evasion“, and condemned to 4,5 years of incarceration in a colony with a reinforced regime; his property was confiscated. He was freed ahead of schedule in June 2014.
For 25 years of his human rights defending activity, he received numerous prizes and awards: the Swedish Per Anger Prize; the Andrei Sakharov Freedom Award; the Homo Homini Award awarded by Václav Havel himself; the award of the Norwegian Writers’ Union „For Freedom of Speech“; the award of the United States Department of State; the Lech Wałęsa Award; the Petra Kelly Award; Václav Havel Human Rights Prize of the Parliamentary Assembly of the Council of Europe (PACE); the award „For human rights and rule of law“, etc. Prior to his 2022 award of the Nobel Peace Prize, Bialacki was nominated five times unsuccessfully.
On July, 14th, 2021, he was arrested according to a criminal charge; his house and the „Viasna“ office were searched.
Now, Aleś Bialacki is in Detention Center №1 together with his colleagues: human rights defenders Valancin Stefanovič and Uḷadzimir Ḷabkovič. All of them are recognized political prisoners.
On October, 7th, 2022, Aleś Bialacki received the Nobel Peace Prize.